There have been concerns lately about the whereabouts and health of Edward Snowden.

The ex-NSA contractor’s Twitter account has gone silent, which it does from time to time, and people outside of Russia have read dark implications into this fact. Just before going silent, Snowden tweeted what looked like an encryption key, and the post was almost immediately deleted. Earlier, he had tweeted what appeared to be criticism of WikiLeaks.

Democratizing information has never been more vital, and @Wikileaks has helped. But their hostility to even modest curation is a mistake.

But the strangeness around Snowden’s twitter account doesn’t stop there. For example, in June, he apparently tweeted some snark in fluent German, (h/t this guy).

Didn’t know Snowden spoke German so well? He very well may not speak any German at all.

These unanswered questions around Snowden’s Twitter account are a reminder that we really don’t know how much control he exercises over his own social media presence.

More broadly – much more broadly – assuming a single Twitter account is linked to a single person may be one of the presumptions about the internet that Russia routinely turns on its head through their own innovative use of social media for propaganda purposes.

After all there is no law linking a person’s driver’s licence or national ID to a social media account. Twitter, for example, allows you to change not just your name but your handle.

The slippery nature of social media identification and the low-barrier to entry very much aids Russia’s “firehose of falsehoods”  strategy in which the momentum of the comment and misinformation stampede helps give an idea or meme staying power in the mind of the public.

Russia, though, employs trolls to create realities online that can help shape perceptions of political reality. It can dial up a social media storm on issues, by using a combination of paid trolls, bots on twitter, unofficial news sites, in combination with platforms like RT and Sputnik. Motivated bloggers and meme-makers play a part too. These stories can migrate from the outer fringes of the internet to the mainstream. From Alex Jones to Dow Jones Newswires, if you will. From chemtrails to the campaign trail.

It reflects the title of  Peter Pomerantsev’s book: “Nothing Is True and Everything Is Possible.”

In this process of creating these unrealities online, one of the things Russian trolls are likely to change is their identity, their twitter handle and the avatar. In fact, these would be among the first thing to change as needed for the campaign. Journalist Adrian Chen, who wrote the groundbreaking investigation into the troll factory in Saint Petersburg notes as much in an interview late last year.

“A very interesting thing happened: I created this list of the Russian trolls when I was researching [this story] and I check in it, once in a while still, and a lot of them have turned into conservatives accounts, like ‘fake conservatives’, and they’ve all been tweeting about Donald Trump.”

Another example comes to mind.

When Australian actress Samara Weaving protested the use of her image as an example of ‘liberal’ violence the twitter account that first publicized it was @Cons_Nation. (The “invented fact” is a trait of the firehose of falsehoods strategy.) 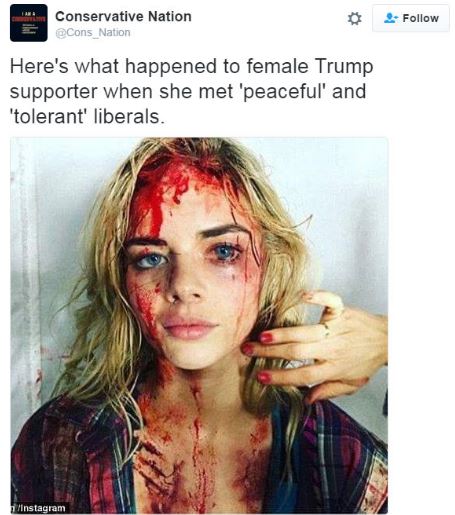 You can see from these posts that the account with that name was posting well before striking upon the image of Weaving.

Since then, the same account has been deleted and now shows that it was started only in July 2016, under the name “theseanhayes”. It will be interesting to see if it comes alive again to spout more misinformation.

Deleting social media accounts, renaming them and recycling them  is why, when historians look back at how Russia meddled in the 2016 US election, it will be extremely difficult to piece together the news that shaped the perceptions. Much of it will be deleted by the account holder.

The use of social media in this way is one of the traits of Russia’s information war against its enemies.