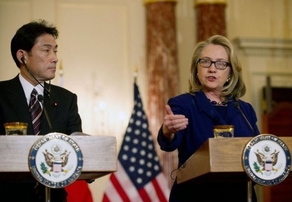 To file under “cooler heads”.

Sec’y of State Hillary Clinton, looking smart in (new?) glasses after her stay in the hospital, reiterates the American position on the East China Sea island dispute. Basically, the US offers understated support for the Japanese position.

“Although the United States does not take a position on the ultimate sovereignty of the islands, we acknowledge they are under the administration of Japan,” said Clinton. “And we oppose any unilateral actions that would seek to undermine Japanese administration. And we urge all parties to take steps to prevent incidents and manage disagreements through peaceful means.”

From the transcript:  With regard to regional security, I reiterated longstanding American policy on the Senkaku Islands and our treaty obligations.

Calm is a them with Japan too.

“While Japan will not concede and will uphold our fundamental position that the Senkaku Islands are an inherent territory of Japan, we intend to respond calmly so as not to provoke China,” he said.

Also from the transcript:

Now, over to China. What calm things will they say?

A story has surfaced that the Japanese would consider using US-made unmanned Global Hawk drones by 2015 to patrol around the Senkaku-Diaoyu Islands.

At first glance, this would seem the latest escalation of the island dispute.

Yet, just a little googling shows that the Japan had already signaled interest in using Global Hawk drones in September, around the time of the flare up between China and Japan.

My guess is that the only thing that makes today’s story new, is that a reporter put the question to the Japanese in the context of the island dispute.

But this sort of story highlights another element of the way this event is covered in the media.

More attention on the Senkaku-Diaoyu Island dispute seems to increase the expectation that more will happen. This has a self-reinforcing quality to it. i.e. There is more interest in this dispute, so there is more appetite for stories in the media and blogosphere. In fact, a statement on the tail end of this story brought this to mind. (the last paragraph).

The Japanese government upgraded its information liaison office set up at the crisis management center of the prime minister’s office to deal with the issue.

Which means that previously, where a Chinese incursion into Japanese waters around the Senkaku-Diaoyu Islands would have been noted internally in Japan, among Japan’s Self-Defense Force and selected discreet channels, now, thanks to an “upgraded” information liason, such pseudo-events automatically generate news stories.

Obviously, there are real tensions around the Senkaku-Diaoyu Islands. This is a real dispute. But having a daily story, even if nothing has changed, may actually lessen the chances of a peaceful resolution by keeping the issue front and centre. I myself have opted against blogging every story of a Chinese ship movement when they don’t dramatically change the nature of the bigger issue.

“We hope the new Japanese administration will meet the Chinese side halfway and make concrete efforts to overcome difficulties in bilateral relations,” foreign ministry spokeswoman Hua Chunying told reporters, according to AFP.

This would all be well and good if China itself had not sent a plane over the disputed islands three days before the December election in Japan. It was first such incursion by a Chinese state plane into Japanese airspace in the modern era.

If China was serious about improved relations, why would China do anything to further aggrevate the already tense relationship? Plainly there are conflicting authorities within China, sending out highly contradictory messages to Japan.

The military is its own political power within China, and operates more or less independently of the Communist Party of China for any matters related to China’s disputed borders.

And so a vision of China emerges of a country that has undergone tremendous growth, while the fiefdoms within -the CPC and the military along with all the other internal poles of power – have maintained their own autonomy from each other. That’s true even with Xi Jinping taking the reins of the military.

So the CPC and military can’t coordinate a consistent message between each other. In this way China is, in the words of Edward Luttwak, “autistic.” He believes there is “no strategy at all” underpinning China’s rise. Recent events suggest that is the case.

To extend Hugh White’s phrasing about the risk of misunderstandings between nations, one of the greatest ongoing “misunderstandings” may be between China’s communist party leadership and its military leaders. 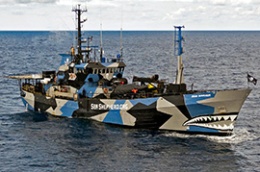 Oh, good. Just when the Senkaku-Diaoyu Island issue wasn’t complicated enough, enter the environmental flotilla Sea Shepherd – on the side of the Chinese.

In their own words…

In light of the ongoing slaughter of dolphins in Taiji, Japan and the continued killing of whales by Japan in the Southern Ocean, Sea Shepherd Conservation Society wishes to support Chinese efforts to assert sovereignty over the islands known as the Diaoyu Islands by China and the Tiaoyu Islands by Taiwan.