I am reading Benn Steil’s The Marshall Plan: Dawn of the Cold War, a bracing narrative of the uncertain, fateful years immediately after the World War II, when the US was thrust into a dominant place in Trans-Atlantic relations.

Steil’s book illuminates the combination of intentions, hunches and just plain luck that enabled the US plan to help Western Europe avoid Soviet domination. In achieving its goal, the Marshall Plan created the structure on which so much of the post-war liberal order rested – and still rests today. The institutions that it spurred include the EU and NATO.

The Marshall Plan (Simon & Schuster, 2018) is rich with detail on the economic and financial realities of the period. Some facts are eye-opening: 80 per cent of  Germany’s industrial plant capacity survived the war and more of its industrial equipment was new at the end of the war than at the beginning.

Mixed in among the facts and figures are the personalities driving the complex, ambitious plan for European recovery. If character is destiny, this tale of the dizzying first years of the Cold War, is told through characters and their temperament. Vyacheslav Molotov was so patient in negotiations, he seemed almost dim-witted, to his diplomat rivals.  State Department intellectual George Kennan believed Marxism had been co-opted by Russia to justify its expansionism, but not enough people understood this – they instead chose to focus on maps and falling dominoes. Consider the character in this detail in George C. Marshall’s meeting with Soviet leader Josef Stalin in Moscow:

‘Impassive, Stalin puffed a cigarette; looking down, to the side, occasionally into Marshall’s eyes as he listened to the American and his translator. A red pen in his right hand throughout, he doodled wolves’ heads on a notepad, in plain sight of his guests – a practice he was known to have cultivated some time ago for the purpose of disconcerting them.’

Harry Truman was strong-willed but faced with a steep learning curve in post-war and hostility on both sides of the aisle. The US president, Steil writes, was happy enough for Marshall to take public credit for the plan he unveiled in a speech to Harvard because he thought it would fare better with congress than if it bore his own name. The Americans involved in the Marshall Plan are taciturn, serious, buttoned-downed with practicality.

Marshall himself, already famous for his wartime role as a Army Chief of Staff, sounds like Jack Webb when he learned Truman wanted him for secretary of state. “My answer is in the affirmative, if that continues to be [the president’s] desire. My personal reaction is something else.” The service was not just to the nation or president but to the Cause of America. And yet in the 1940s, in the aftermath of war mobilization, the motives reflected the political culture, which was more cohesive than the current fractured age.

That’s not to say there weren’t other considerations in the driving for the recovery plan. At the end of the war, the US economy reigned supreme. Yet if Europe’s economy didn’t get back on its feet, the US-export-based economy would start to falter. There was a genuine fear among economists that the end of war-driven demand would return the US economy to the depression it emerged from after the attack on Pearl Harbor.

The Marshall Plan was very much a product of its era – a manufacturing-era plan to save Western Europe while securing the US’s position against a probing Soviet Union, itself testing the limits of the emerging geopolitical order. The US today – as well as other developed nations – are transitioning to the information economy. How would the US use its growing information economy to hold the line against both Russia and China? It’s far from clear. If there were coherent leadership in Washington, one could imagine the US using its information power to keep the worst ambitions of kleptocratic nations in check. Instead, it appears that the those nations have acted first and are using information power to collapse and weaken the US from the inside.

That’s not to say there aren’t Americans acting fast to try to prevent a breakdown of democracy at home and its order-making power abroad. There are. But just they’re not in highest offices – and too many Americans don’t fully understand the new information reality they confront. 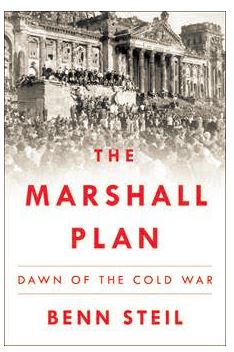 For some, part of the problem may be the flawed hope that the nation can magically return to the Good Old Days, those being post-war America. Certainly, it’s easy to look back at the time when America got things done through the glow of history.

Steil does a good job of depicting the hard-nosed reality of the time. Washington had only limited choices for policy and strategy. Bad moments could have been worse. No doubt the spectre of a world war may have helped contain the riskier behavior on both sides.

The Marshall Plan is a good reminder that the post-War years weren’t the golden era of certainty we pine for now. They were tense and uncertain. Politicians, who were mostly competent, were still flawed and blinkered. Society was still rattled by the war and paranoia about communism.

In other words, upon closer inspection, there is no such thing as the good old days. Not even when the US’s position, from today’s perspective, seemed unassailable, with all the risk and danger deceptively suspended in the amber of the History Channel docos.

Steil’s lucid reminder of US political history should serve not to further paralyze Americans today coping with political warfare in an information age. Rather The Mashall Plan should energize and focus citizens of democracies today, to help them recognize what a world in dramatic geopolitical flux in looks like. And how smart policy and strategy, well executed, can pay dividends for decades to come.