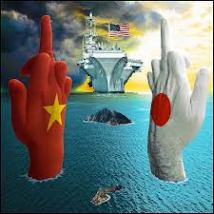 The Washington Free Beacon says China is deploying missiles near the Senkaku Islands. (Notice they are only referred to as the Senkaku.)

U.S. defense officials said the movements are being watched closely as China’s military is also holding large-scale military exercises that some fear could be a trigger for a conflict with Japan that could involve U.S. forces.

The Daily News stated that the missile movements were signs the PLA is “preparing for the worst regarding the territorial dispute between China and Japan over the Senkaku Islands.”

The fact that the upstart Washington Free Beacon is focusing on this suggests America’s right may be discovering the multi-faceted China Challenge.

One question: What took you so long, guys?

Good that America’s right, short a cause or two, are looking past Iran and the problems of the Middle East to notice the long term strategic challenger rising in the Far East. Could this be something that galvanizes them and gives them an issue they can run with in US politics? Too early to say.

A more intriguing article may possibly be this comment piece from the libertarian Cato Institute that says:

If Washington isn’t comfortable with a more powerful China demanding a greater say over Asian security issues, making China wealthier by trading with it doesn’t make much sense.