Onodera didn’t dispute China’s desire to carry out drills, according to Reuters.

“For China to carry out regular drills is not illegal, and for us to be cautious is also natural, I believe,” he said.

“It’s important to set up a Japan-China hot line so suspicion and mistrust doesn’t arise between the two sides.”

This article from the People’s Daily suggests that might be on its way:

The Philippines is considering giving the United States and Japan greater access to Manila’s military bases, the country’s defense secretary said on Thursday.

The article quotes an analysts who notes, and I don’t doubt this, that the US is wary of being “kidnapped” by the Philippines on this issue, especially given Manila’s handling of disputes. And it’s not as if US-Philippines relations around the military are all rosy.

Nonetheless, it’s another sign of the times as the ASEAN countries meet.

Japan’s possible involvement shows how remote these concerns about Japan’s imperial past are for South China Sea countries. 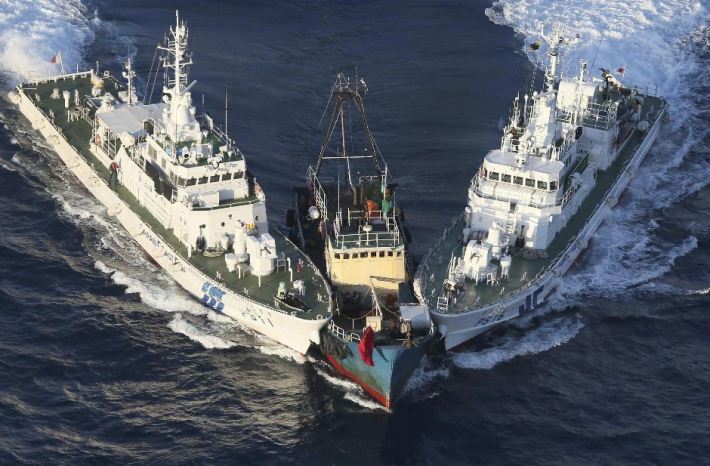 This Reuters article containing speculation that China’s navy is trying to “wear out” Japanese ships around the Senkaku-Diaoyu Islands, contains a little bit of interesting commentary about why tensions have increased so much between China and Japan.

…military experts suggest Beijing has decided to intensify its operations against Japan, a nation whose wartime aggression is remembered across Asia, because confrontations with smaller neighbors in recent years had led to a region-wide diplomatic backlash.

“The Senkaku/Diaoyu hoopla of late is triggered by China’s desire to extricate itself from total regional isolation caused by China’s expansive territorial claims against virtually all of its maritime neighbors,” said Yu Maochun, an expert on the PLA at the Annapolis, Maryland United States Naval Academy.

This could be – but it strikes me as too coordinated for the Chinese. I can almost imagine forces within the PLA navy vying to outdo each other in taking tougher lines against the neighbouring nations. As Japan offers more resistance, it receives more pressure.  At the same time, if China was trying wear out the Japanese coast guard and navy, I suppose that would hinge on the notion that Japan’s economy also couldn’t sustain such prolonged competition. We’ll see.

My favourite part of article: the PLA reference to “islands” located off the Chinese coast. Telling language about Japan.

In late January, the PLA said a naval fleet would conduct a naval exercise in the Western Pacific after “sailing through islands” off the Chinese coast, a clear reference to the Japanese archipelago. The navy had conducted seven similar exercises last year, it said.

Just some islands there. Japan.

Three People’s Liberation Army-navy ships will visit Australia this week on their return from the Gulf of Aden.

“China is an important partner for Australia in the region, and we share a positive and constructive defence relationship,” Chief of the Defence Force general David Hurley said.

No indication in the announcement of where they will turn up. But in May, an Aussie warship docked in the China. This shows that, despite the impending regional competition between China, its neighbors and the US, Australia is definitively friends with everyone.